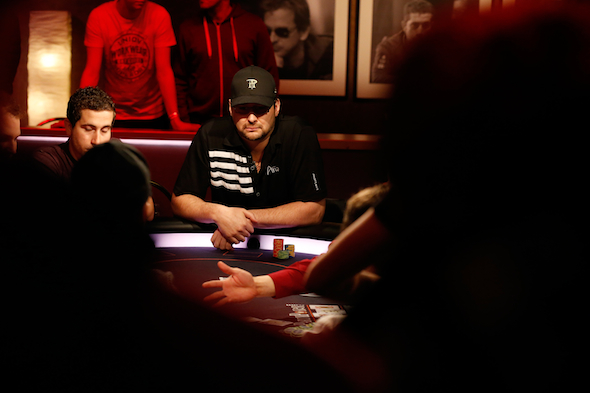 Hellmuth OUT! Esfandiari and Seiver IN!

Coming into tonight’s final heat of Group A everyone could qualify and only Jonathan Duhamel knew his fate. Level three saw Daniel Negreanu and Marvin Rettenmaier eliminated and Level four was the level where more issues got sorted. When Phil Hellmuth was eliminated in sixth place, it meant that he needed Scott Seiver to go out next to stay in it, so when Antonio Esfandiari went out in fifth, it meant he was out and defending champion Scott Seiver was in. The blinds have just ticked up to 6,000 – 12,000 ante 2,000

The players chip stacks are as below. The +/- figure in brackets is their profit/loss since the end of the last level and the big blind figure is how many they have for the current level.

Scott Seiver With the elimination of Phil Hellmuth and Antonio Esfandiari the defending champion is in the play-offs at the very least.

Phil Hellmuth – The Poker Brat is out of this year’s Premier League after an incredible run of luck conspired against him and to rub it in he witnessed his exit from the commentary box.

It can only be the Antonio Esfandiari elimination, a hand that kept Scott Seiver in the Premier League and knocked out Phil Hellmuth.

In the Magician’s exit hand he shoved with

and got looked up Jonathan Duhanmel with

. ‘This could be the first time anyone’s ever got knocked out of the Premier League in the commentary booth,” said Jesse May.

flop was bad for Esfandiari and worse for Hellmuth, the

turn gave Esfandiari a straight draw, but he missed it on the

“Ironically this could be the best Premier League that I’ve ever played an I’m out.” Phil Hellmuth steps into the commentary booth and watches his own exit.