You are at:Home»Grand Prix»partypoker LIVE Grand Prix Debuts in Barcelona

Barcelona is one of the most fascinating cities in the world. The capital and largest city of Catalonia is the sixth most populous urban area in the European Union, trailing only Paris, London, Madrid, the Ruhr area and Milan.  partypoker LIVE takes its Grand Prix tour to Spain for the first time in its history during mid-October, ensuring even more people will be in Barcelona.

The Grand Prix Poker Tour started life in November 2015 when Rob Yong and his Dusk Till Dawn management team decided to host major poker tournaments at famous football stadiums around the United Kingdom.

Reminiscent of the International Stadiums Poker Tour (ISPT) that took place at Wembley Stadium in 2013, the Grand Prix Poker Tour set about trying to capture the magic and atmosphere of playing poker in iconic football stadium.

Where the ISPT fell flat and overlaid by €600,000, the Grand Prix Poker Tour was an instant hit. Sunil Mistri won the inaugural event, which was held at Premier League outfit Chelsea’s Stamford Bridge. Mistri banked a £35,000 for his £70 buy-in after outlasting 3,299 opponents.

The tour headed to the home of Scottish football, Hampden Park in Glasgow where Drew Kirkland was victorious. James “Flushy” Dempsey, a regular feature on the partypoker LIVE streams, took down the Brighton leg at The Amex Stadium; Dempsey resides in Brighton so this victory was even more special. The Welsh got in on the action at the Cardiff City Stadium, although it was an English man who was triumphant, Alan Picken defeating home-town boy Daniel Hamblin for the title.

Peter Cahill won the Irish Grand Prix at the I.N.E.C Killarney before the tour returned to the home of British poker, Dusk Till Dawn. Former World Series of Poker Main Event finalist Jon Kalmar won that event for £30,000. 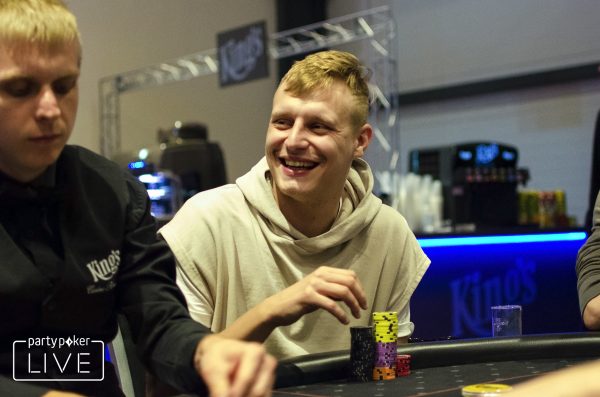 Andrej Desset is a huge fan of the Grand Prix events.

Following the success on home soil, the Grand Prix events expanded into Europe under the partypoker LIVE banner. The Vienna leg proved extremely popular. With a €225 buy-in, 2,594 players bought in and were outlasted by Andrej Desset who scooped €92,530. Amazingly, Desset won back-to-back Grand Prix after securing the €100,000 top prize at King’s Resort, Rozvadov a couple of weeks later.

The most recent Grand Prix took place on the weekend of July 5-7th and saw 2,035 players compete in the Grand Prix UK. Benjamin Sweetman was the last player standing. His reward? A cool £90,000.

Now the Grand Prix heads to Spain for the first time in its history. Season 1 MILLIONS Grand Final was the only time partypoker LIVE has stepped inside Spain, players deemed it a roaring success.

While the prize pools on offer at Grand Prix Barcelona will be less than when the Grand Final was in town, so is the tournament buy-in. The Grand Prix only costs €220 to enter yet partypoker LIVE has slapped a €500,000 guarantee on the prize pool, half a million euros. Imagine getting your hands on a slice of that.

Satellite and the Golden Chip Promotion

When partypoker LIVE was last in Barcelona

Grand Prix Barcelona features five online Day 1s and six live Day 1s, the latter taking place at the Casino Barcelona. You can enter as many Day 1s as you like, but can only take your largest stack through with your to Day 2 if you progress more than once. Reaching Day 2 guarantees you are in the money. Navigating your way to Day 2 more than once means you lock up cashes on each of those occasions.

Navigate your way through an Online Day 1 or buy-in with PP LIVE Dollars to receive a Golden Chip. You then win a $6,000 package to the Caribbean Poker Party if you manage to play your way to the final table in Spain!

Mega Satellites for the Grand Prix Barcelona Online Day 1s run Sunday 20th October through Thursday 24th October costing between €22 and €44 to enter and each guaranteeing at least 20x €220 seats will be won.

PP LIVE Dollars are the way to go if you want more flexibility. Win PP LIVE Dollars online at partypoker every day. This virtual currency is used to buy into any partypoker LIVE event or exchanged for travel and accommodation expenses. Any PP LIVE Dollars won have a two-year expiry date, meaning you can pick and choose which events you want to play.

Feeders for PP LIVE Dollars start at only $0.11, giving even more people to chance to get their hands on this flexible poker currency.

partypoker LIVE will be in Barcelona for the €500,000 guaranteed Grand Prix, the question is: will you?