You are at:Home»Older posts»gnouhp Takes Down the Latest $200K Guaranteed Sunday and Wins $28,726

On Sunday at 18:30 BST, gnouhp was one of the 1,160 players who sat down at the partypoker virtual felt in the $215 buy-in $200K Guaranteed Sunday tournament. Fast-forward 11 hours and as morning was breaking, gnouhp was busy negotiating a deal that netted him $28,726.

Like last week’s $200K Guaranteed Sunday, this tournament ended in a four-way deal. With the time reading 05:34 BST, the final four players took advantage of the deal-making feature in the partypoker software and struck a deal based on ICM (Independent Chip Model). This saw prizes awarded between $19,821 and $28,726 and meant gnouhp, who held the most chips at the time of the deal, had earned more than $2,600 per hour while competing in partypoker’s flagship tournament.

Although the $200K Guaranteed Sunday final table is usually 10-handed, this week’s was played nine-handed due to RENSERIET and n0liits busting during the same hand to finish 9th and 10th respectively. Three hands into the final table and dani2611 busted. With blinds at 7,500/15,000/1,500a, dani2611 looked down at pocket nines and opted to move all in for 179,632 chips in total. This all-in bet folded out the next here players, but when the action was on gnouhp in the hijack seat, he called with pocket jacks. The other active players folded and when the board ran out

A couple of orbits later and the tournament lost another player, this time it was inever_win09 who lived up to his name of never winning. The action passed all the way around to DipesLIVES in the small blind and he completed. Inever_win09 shipped in his 274,150 stack (13 big blinds) with

in an attempt to win the blinds and antes. Unfortunately for inever_win09, DipesLIVES instantly called, having played his

sneakily. The aces held on a

The remaining six players looked happy to settle most pots preflop until another relative cooler of a hand took place to send PitschiPopo78 to the sidelines. Down to around 9.5 big blinds, PitschiPop78 moved all in from early position with

and was called by aces_up8216 who was next to act. Aces_up8216 held a dominating

and was a 73% favourite to bust his opponent. Once the other players mucked their hands, the first three community cards came into view:

. Despite picking up an inside-straight draw PitschPopo78 remaining a significant underdog in the hand. The

turn didn’t alter matters and neither did the

river. Game over for PitschPopo78.

Gnouhp then won two big hands in quick succession to climb to almost 1.5 million chips. The first saw him take down a 480,278 pot on the turn of a

board, the second was from winning a coin flip that sent buchanan85 to the rail. 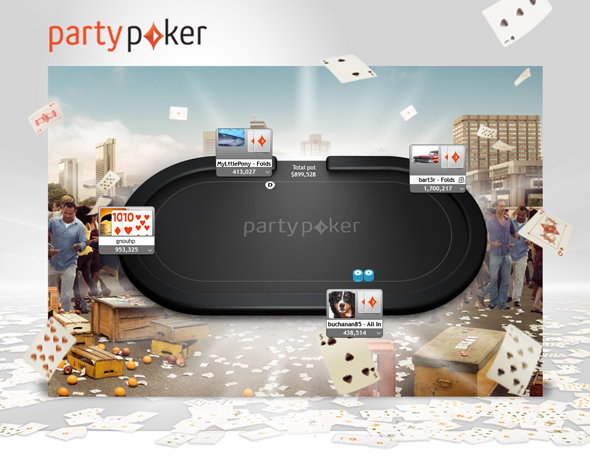 In buchanan85’s exit hand, gnouhp min-raised to 50,000 from under the gun, prompting folds from everyone except buchanan85 in the big blind. After a brief pause, buchanan85 three-bet all in for 436,014 with

only to see gnouhp quickly call with

flop was safe for gnouhp and although the

turn gave buchanan85 a gushot straight draw, it was unlikely to come in as gnouhp held two of the tens that would fill it. The inconsequential

Eleven hands later and gnouhp won another key hand that put MyL1ttlePony” out to pasture. MyL1ttlePony open-shoved for 12 big blinds from the button with

and gnouhp called from the big bind with

. As he had done to send buchanan85 to the rail previously, gnouhp won the hand as the community cards fell

With sunlight breaking through the darkness and the remaining players becoming increasingly tired, talks of a possible deal began. One suggestion was to split the remaining prize pool based on chip counts, but the foursome finally agreed to chop based on ICM. gnouhp seemed reluctant to deal, but when you are offered more $28,726 for 11 hours work, it is hard to turn down!

With the deal agreed upon and the decision not to leave any additional money for the champion, the tournament ended with gnouhp sat at the top of the leader board, the latest player to win this fantastic tournament.

The all new partypoker has introduced a new Sunday tournament schedule. The key changes are the addition of an action-packed fun $10K Super Bounty and a wide range of new low buy-in tournaments featuring the best of the old but also new speed, rebuy, add-on and PLO tournaments – a great Sunday mix if you want to win top prizes and have fun playing tournament poker.

Keep up to date with the all new partypoker!