The World Poker Tour descends upon Nottingham in November and the whole city is preparing. There is a real buzz among the city as Dusk Till Dawn (DTD) is set to become the first venue outside of London to host a full WPT festival in the UK.

The exclusive event was held at the Student Union at Nottingham University and was well attended by national media, poker fanatics and loyal Nottingham Forest supporters. Also on hand were our lovely promo girls who were offering new players the chance to win a WPT500 seat just for signing up to partypoker. 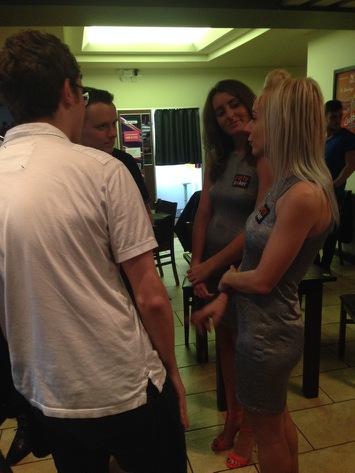 Excited crowds gathered as Pearce entered the building and his stage was set with DTD providing partypoker-branded tables, chips and the delightful Nicoletta to deal the session. 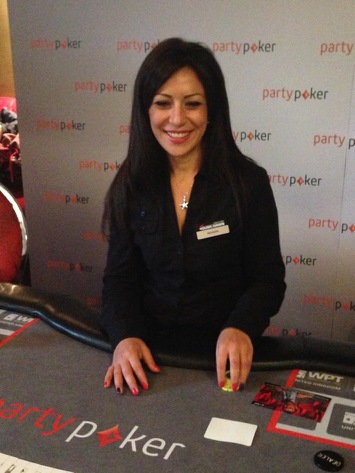 After a few snapshots from the media Pearce took his seat for a one-on-one poker lesson with Trumper.

Who is teach who here?

Trumper, a former Late Night Poker winner, has cashed in five World Series of Poker events and now jets around the globe playing on behalf of DTD; he makes the ideal teacher for someone new to this fantastic game we call poker.

Pearce and Trumper sat down for a 30-minute recorded poker lesson where the logistics of the game, basic strategy and some terminology were discussed, but it was clear to see “Psycho” was definitely interested in the psychology of poker and how he could get inside the minds of his opponents.

In an interview after the session, Pearce described the afternoon as ‘enlightening.’

‘It was really interesting to get some knowledge from a professional about the psychology of the game. It was intriguing to be able to dig under the surface; to see the subtleties.’

The University’s Poker Society members were then invited to take part in a sit and go tournament with Simon as the awaiting media got their time with man of the moment, Stuart Pearce. Trumper generously offered a £50 tournament entry as a prize for the winner of the comp.

Unfortunately for Trumper, he couldn’t keep the prize for himself because he bust in fourth place running [Qx][Jx] into his namesake ‘Aces.’

Trumper busted in fourth place, but didn’t seem too bothered!

The eventual champion was society club member Alec Felton who was delighted when he won the seat.

After the sit and go tournament and interviews concluded, the queue’s continually grew as everyone wanted their chance to take a “selfie” with Pearce and grab the opportunity to secure his autograph. Two avid fans even showed up with brand new Forest shirts, tags still attached! 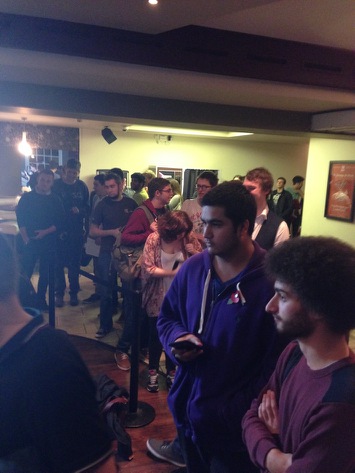 Rehman Kassam, a University of Nottingham Poker Society member, spent the afternoon at the event. “It was enjoyable and really fun meeting a legend like Stuart Pearce and getting to play some poker.”

Pearce himself was actively interested in the University players and the place as a whole constantly asking questions. He even commented on the relationships between Nottingham Forest himself and the universities saying, “When the uni’s break up the city seems really quiet.”

He then went on to describe his views on Nottingham as a whole, adding, “I’m really fortunate to be working in and with the city. It is a city that is very close to my heart. I’ve been away 17 years and there is 10 of the same staff still at the club.” As you can see, Stuart Pearce has the perfect poker face!

The Forest manager was very laid back during the afternoon, clearly absorbing everything he learned about poker and the sense of intrigue was clear to see. Maybe we will be seeing him at the tables soon? Perhaps he’ll stop by DTD while the WPT500 is up running? Stranger things have happened.

Overall, the event was a huge success and it was evident that everyone who attended enjoyed themselves and benefited from the experience. We will announce the winner of the free £1,000,000 guaranteed WPT500 UK seat in the next couple of days. Good luck!

Grab a Free £10 When You Sign Up To partypoker

Want to get in on the action but don’t have a partypoker account? Well there hasn’t been a better time to change that fact because new customers can claim a free £10 and win their way to WPT500 UK when they create their new partypoker account. Check out the video below for some extra details.

Qualify For WPT500 UK For Free