You are at:Home»Older posts»Experience shows in Heat 5 as Andy Black progresses to the final 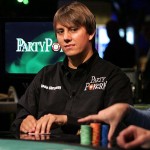 Five heats down and and former WSOP Main Event finalist Andy Black becomes the fourth pro to make it to the final.  The Irishman dominated the the field showing why he was clear favourite to win the heat.

PartyPoker pro Bodo Sbrzesny was the only man who really managed to move the famously phlegmatic Black out of his comfort zone drawing him into losing calls on a few occassions.  But those losses were soon recouped by Black against the weaker opponents on the table.

The triple stacked format seems to be favouring the professionals as it allows them to play a more creative style of poker rather than having their hand forced by speedily increasing blinds.

We are seeing the pros bluff a lot more this time around testing the more inexperienced players mettle.  Not surprisingly, it was Black who adapted the best to the new conditions, always asking searching questions with his raises and all to often he hit his hand or his opponents meekly folded.

In previous heats we have all the players survive through the first couple of blind levels but to everyone’s surprise Irish pro Liam Flood exited the stage early in the piece at the hands of young upstart Andrew Feldman.  Vladimir Geshkenbein soon followed Flood and then Feldman was the next to depart as he went all in with top pair only to be called by PartyPoker pro Bodo’s trip fives.

As the heat moved into the following day it became the Bodo and Black show sharing the spoils of glory as player after player exited.  By the time we were heads up Black had built a commanding lead leaving Bodo little option to go all-in once he found a decent hand.  And so it was, Bodo pushed with A6 and Black called with Q9, hitting the Queen on the flop to send Bodo packing.

A special mention must go out to online qualifier Paulo Melo, considering this was his first live tournament and he qualified through three satellite tourneys starting with a $3 stake to make it into the top four was a great achievement.

Heat 6 followed soon after featuring a pair of PartyPoker pros Mike Sexton and Felipe Ramos and reigning champion Marty Smyth.  We’ll have a report on heat 6 tomorrow in the meantime catch up with action as it happens over at our twitter feed @partypokernews.