You are at:Home»Older posts»Esfandiari works his magic, has over half the chips in play four handed 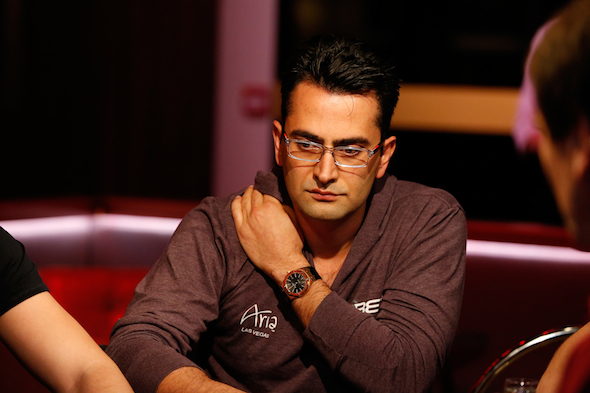 Esfandiari works his magic, has over half the chips in play four handed

This was the level where Antonio Esfandiari took controla and won a massive 1,200,000 chip pot to eliminate Jonathan Duhamel. The Magician should end up in the final two of this heat and lock up at least 11 much needed points.

The players chip stacks are as below. The +/- figure in brackets is their profit/loss since the end of the last level and the big blind figure is how many they have for the current level. Blinds are now 12,000/24,000/4,000a

Antonio Esfandiari – He doubled through Phil Hellmuth and has recovered some of the ground he lost when Sam Trickett bluffed him off the hand. Plus he dented Hellmuth, someone he needs to leapfrog to get into the top five. He then eliminated Jonathan Duhamel to own half the chips in play with four left. He’s getting his Premier League back on track, zero to hero style.

Jonathan Duhamel For so long this looked the Canadian’s heat to lose, he had over 900,000 when his closest rival had less than 500,000. But a few hands went against him and he exited in fifth to add just four points to his total. He’s a shoe-in for the final though. You can read about his exit here.

There can only be one hand from that level, the biggest pot we’ve seen so far in this heat played out as Jonathan Duhamel and Antonio Esfandiari played a 1,200,000 chip pot.

The action was opened by Esfandiari, the Magician made it 42,000 to go on the button with

“This is a big one Mum,” said Esfandiari. “We need to hold.” The board ran

and Esfandiari sent Duhamel to the rail.

“They might just nubbin this,” Jesse May on how Scott Seiver and Phil Hellmuth might blind right down in their quest to pick up valuable Premier League points.