You are at:Home»Older posts»Esfandiari running away with Group A Heat 2; Three players remain 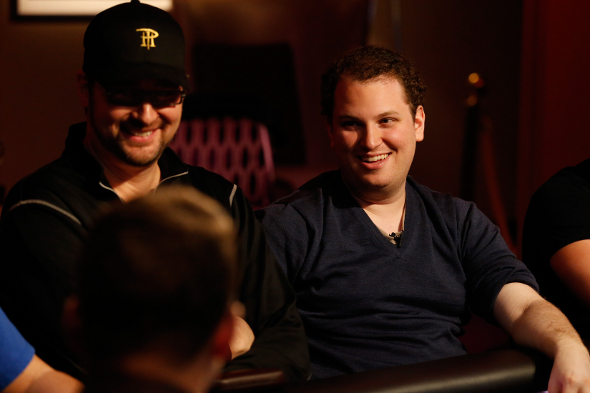 Esfandiari running away with Group A Heat 2; Three players remain

Antonio Esfandiari has opened a large chip lead up; he has double that of Scott Seiver in second place.

The players chip stacks are as below. The +/- figure in brackets is their profit/loss since the end of the last level and the big blind figure is how many they have for the current level. Blinds are now 15,000/30,000/5,000a

Scott Seiver – A double up through Phil Hellmuth helped Seiver to increase his stack by more than 100% during the level.

Sam Trickett – The man who finished second in The One Drop for more than $10,000,000 misread Antonio Esfandiari’s stack and moved all in with pocket fours and ran into Esfandiari’s dominating pair of kings. Trickett received no help from the board and his tournament ended abruptly.

Shortly after doubling Hellmuth up when Seiver’s

filed to get their against Hellmuth’s

and Hellmuth called with

board was kind to Seiver and he doubled up, leaving Hellmuth short.

“He’s dodging bullets just like he says in the magazines!” – Phil Laak comments as Hellmuth fades an aces and a flush to double through Antonio Esfandiari.