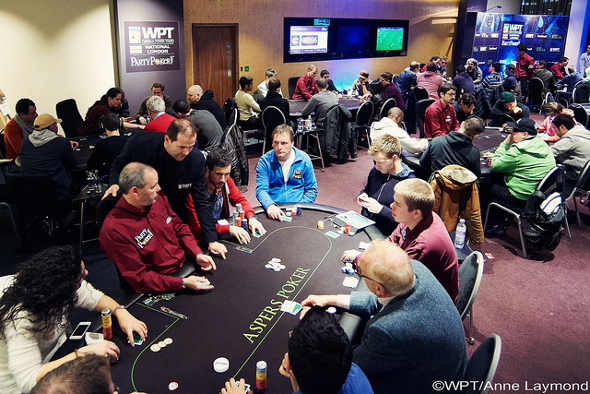 The players are now back in their seats and, thanks to the redraw, they are trying to figure out their new foes.

“I busted out and now I have no cup of tea. It’s been a bad day,” Salter told us.

Elsewhere, Giacomo Fundaro opened to 11,500 from early position and the action passed around to the chip leader Elior Sion in the hijack. The young spectacle-wearing Londoner three-bet to 24,000. The other active players folded but Fundaro thought long and hard – read that as nearly two minutes – before relinquishing his hand.

Over on Table 1, Lithuanian Zydrunas Lukosiunas opened from the button, Tudor Purice three-bet from the small blind and then folded when Lukosiunas insta-shoved. Purice raised his eyebrows, sighed and mucked, but didn’t look too please about having to do so.

Last, but not least, on a

flop, Rasmus Larson checked in the big blind seat, which put the action on Sebastian Muller. A brief pause and Muller set the price to play at 15,500. Larson responded with a check-raise to 35,500 but Muller was going nowhere and he called.

The turn was the

Muller won the pot with his