You are at:Home»Older posts»DTD’s Rob Yong: “Anything Less Than A Complete Success Is Unacceptable”

DTD’s Rob Yong: “Anything Less Than A Complete Success Is Unacceptable”

Imagine showing up to a tournament in your local casino only to be turned away because you were late. What would you do? Go home? Have a drink? Set up your own card room? The latter is exactly how Rob Yong came to oversee the rise of a European poker stronghold on an industrial estate in Nottingham better-known as Dusk Till Dawn.

The club has gone from strength-to-strength since its opening seven years ago and is now set to host two £1 million guaranteed events, the partypoker WPT500 and WPT UK, as part of the World Poker Tour UK Festival.

We sat down with the entrepreneur and Dusk Till Dawn supremo to get his view on the festival and, as he explains, why big festivals are always something he wanted to bring to Nottingham.

“Our development to higher buy-in events has been an intentional shift away from running mid-range tournaments. Since we started our Monthly Deepstack back in 2007, that market has become saturated. It was a great monthly tournament, but very easily copied. Two years ago, we made a conscious decision to move out of that market and focus on hosting major events.”

How Did the World Poker Tour and Dusk Till Dawn Come Together?

So how did the event come about? Something as huge as a WPT event must have been in the pipeline for sometime?

“Over the last five years, we have actually been in discussions with WPT on a number of occasions, but in my heart I never truly felt that the time was ever right, plus we had the Caribbean and ISPT Wembley projects. However, following the purchase of WPT by bwin.party and Jeffrey Haas being appointed Group Director of Poker, I just felt the time was now right to try and make this happen. I contacted Neil Barrett at WPT and told him that we were ready to do their brand justice. When DTD take on a poker event with a partner, the partner trusts us with their brand and reputation, anything less than delivering a complete success on their behalf is unacceptable. It’s a big deal to me for such large blue chip companies to work with a small independent operator like us, and we must repay this faith back in blood and sweat as it’s the biggest complement that we could receive.”

He also believes that this WPT festival maybe the catalyst for bigger tours to look beyond London.

“London has [always]had the major higher buy in events such as WPT, I believe this will be the first time this is not the case. However since we have focussed DTD on becoming more of an events based business, our numbers have exceeded any location in the UK, we are a venue for poker players and I hope to prove that it is viable for major poker operators to look outside of London going forward.”

It is an eye opening move that has been widely well received by the poker community, especially regular players to DTD.

“Many of us started playing poker after watching the WPT on television, the brand is very strong, there is interest at all levels.” Yong explained.
“I expect a big turn out from the DTD regulars in all of the WPT events. One thing I know is that DTD players are very demanding; they expect us to be at our best, all of the time. I would say overall that many of them are proud that the club will be hosting one of the most prestigious poker brands in the world, they feel like the club is theirs, and act like that sometimes!”

Why is Dusk Till Dawn so Popular With the UK Poker Community?

The team at DTD have to cater for every player type imaginable, ranging from the £20 evening tournament player through to High Rollers who are prepared to part company with £6,000 for one tournament, but the club always comes up with new ways to help players climb the ladder so they are eventually playing comps such as the WPT500. This includes, great promotions, tournament seats included in prize pools and great value satellites that start from a single penny.

“We’ve had some big winners recently who qualified for 1p. You would be surprised by some of the names that actually grind the satellites, feeders and ‘pennyrolls’. People assume recreational means amateur and therefore dead money, that’s not the case.”

What Preparations are DTD Making In Anticipation of the WPT500?

The hard task of publicising the World Poker Tour UK festival to the WPT community was handed to Yong’s Tournament Director, and Late Night Poker extraordinaire, Simon ‘Aces’ Trumper who had the pleasure of travelling to Las Vegas and North Cyprus to take part in their representative 500/National events. 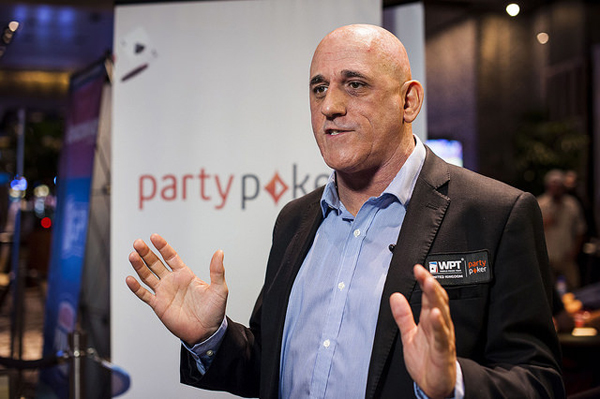 Simon Trumper has been travelling the globe soaking up the WPT atmosphere.

This included: Three weeks in Vegas during World Series Of Poker festivities, travelling by private jet with DTD qualifiers to Cyprus and enjoying beach parties with the players. Trumper will be using the ‘experiences’ gained on these tips to ensure the WPT UK is as good, if not better, than any other WPT event that has ever taken place.

In line with this, the club is undergoing a major preparation operation to ensure it offers the high quality service expected.

This is where Yong takes a back seat and allows his backroom team to make sure everything is in place.

“I’d like to say I know exactly what’s going on, but Nick (Operations Director) looks after all operations and logistics; I leave him to it. I asked him for an extra 25-30 tables on the right side of the club so that we could have constant satellites, singe table tournament’s and cash games running, plus a dedicated hospitality marquee on the left. I believe at the time of writing this has now all been approved by the various licensing bodies. We went to the extra investment of applying for a permanent change to our gaming licence. We now have the option to increase our capacity going forward whenever we need to rather than just a get temporary licence. This means we can do even bigger tournaments in the future!”

Yong definitely knows what he is talking about when it comes to big tournaments as a former player himself. He’s cashed during the WSOP and is an European Poker Tour and Genting Poker Series finalist so we asked if he, or Simon Trumper, will be playing any of the WPT events.

Will Rob Yong Or Simon Trumper Play in the WPT500 UK Main Event?

“Mr Trumper retired 10 years ago,’”he joked, “I won’t be playing any event where we qualify players from online satellites, so I will possibly play the High Roller.”

“I get asked this question a lot, ‘why I don’t play our events?’ The honest truth is 5 years ago in a £1,000 event I knocked a player out in the first hand. He had flopped trip aces and I made a move on him with a gutshot and flush draw, of course, he can’t fold top set and I got there on the river. I thought nothing of it until I received a hand written letter which said,

“Dear Mr Yong,
I am the player that YOU knocked out in the first hand last weekend, I qualified on YOUR online site, I could not afford the travel costs as I have been seeking employment for 5 years, but I hitchhiked from Edinburgh to YOUR Club. On being eliminated on the first hand by YOUR speculative play I asked for a cup of tea and was informed YOUR barman wanted to charge me £1.80. It took me 2 days to get home, hitching lifts back to Scotland with 5 different vehicles. I am writing to tell YOU that you are a t***er of the highest order.
Yours sincerely,
Ludo.’’

The stories behind Dusk Till Dawn’s rise in the industry are quite incomparable, as are the people behind it. The club provides Yong and his team the perfect foundation to try new things and take risks that other UK casinos won’t. He is a pioneer for poker in the UK so if you haven’t already been to DTD then the WPT500 event, during the World Poker Tour Festival, will give you the perfect excuse to sample it for yourself; and we highly recommend that you do!

Take a Peek At What The WPT500 is All About

WPT500 at Dusk Till Dawn Qualifiers In Full Swing

The WPT500 heads to Dusk Till Dawn, Nottingham, United Kingdom in November and features a gigantic £1,000,000 guaranteed prize pool despite the buy-in being an affordable £500. You could be heading their even cheaper than £500 because special qualifier and satellite tournaments are now in the partypoker lobby. We have freerolls and cash tournaments with buy-ins ranging from $1 to $50. Have you won your seat yet?