You are at:Home»Older posts»Disguising your play and other great tips you should learn to become the better poker player 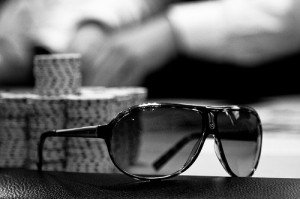 It’s easy to fall into the trap of making poker too complicated and overthinking things — especially at lower stakes — but making sure to disguise your play from time to time is a good habit to get into whether you’re playing penny ante poker or sitting in the Premier League V with the likes of Tony G.

The point of disguising your play at the poker tables is pretty simple; if you play big pocket pairs the same way every time you’re dealt them some of your smarter opponents will catch on and have a much better clue as to what you’re holding than if you mix up your play from time to time.

He Said She Said

Beginning players are worried more about the strength of their hands — and rightfully so — when deciding what play to make, but if you want to improve as a poker player and rake in more profits you need to start considering what your opponents are seeing and remembering as well.

If you only three-bet (raising after an opponent has bet out) with pocket king or aces and fold everything else some opponents will pick up on this and correctly fold their jacks or queens when you three-bet them.

But if you instead also three-bet with a few other select hands like Jd 10d or Kc Qc in addition to your big pocket pairs you’ll be much harder to read, keeping your opponents off-balance and guessing as to what hand you might have.

Lets go to the flop…

The same is true with calling with small pocket pairs and hoping to hit a set on the flop. That’s often a perfect time to set-mine but you’ll need to just call with some other hands as well — such as Ah Kh or even pocket kings or pocket aces — so that savvy opponents later to act won’t try to punish you by re-raising big and forcing you to fold your pocket pairs when you don’t have the proper odds to call.

Disguising your play is also called “balancing your range”, which is a fancy way of saying that it’s a good idea to keep in mind what hands your opponents are seeing you play and show down and the conclusions they may be drawing.

Don’t go overboard with trying to mix things up as your primary concern should be playing solid poker, but you’ll be a much tougher (and profitable) player at the tables if you can keep your opponents guessing more often than not.

As far as a little light-hearted fun on the topic of poker and disguises, check out none other than Vince Van Patten himself talking about his own attempts to disguise his play in an interview at the recent WPT Venice Grand Prix event

Next up on the Live Circuit!

So if you fancy tasting some of the  live action thrill of poker then just remember the WPT Vienna is the next big stop on the international tour, with online satellites currently running on PartyPoker.

Plus the by now legendary Premier League Poker will also be heading to Vienna, with $13,000 trip packages up for grabs at PartyPoker for you to join the likes of Tony G, Patrik Antonius, Vanessa Selbst, and Erik Seidel in one of the world’s biggest buy-in poker tournament! Good luck!

Share. Twitter Facebook Google+ Pinterest LinkedIn Tumblr Email
Previous ArticleBryan Piccioli aka enterthewu19 on cashing at WPTs, EPTs and WSOPs plus life down south in Mexico and final table strategies and more
Next Article Vince Van Patten on Fake Beards, Wading for Change in the MGM fountains and trying to leave Las Vegas