You are at:Home»Older posts»CPP Package Winner: “I’m a Really Big Fan of These Promotions!”

When the Quick-Fire Leaderboards ran at partypoker over the weekend of July 14, one of the amazing prizes on offer was a $10,000 package to the Caribbean Poker Party.

All players had to do to be in with a chance of winning this poker trip of a lifetime was to play at least 12 sit & go tournaments between July 14-16 and their partypoker alias would be put into a hat for a random draw. When the draw was made, it was Pieter Breedveld who was selected as the lucky recipient of a $10,000 package and now he’ll be heading to Punta Cana with:

The partypoker blog caught up with Breedveld to see how he was feeling about getting his hands on a Caribbean Poker Party package.

Breedveld has never been to the Caribbean so when he was informed that he had won a package for this November he was “very pleasantly surprised and very excited at the same time.” His guest is going to be “a very good friend of mine, someone who I went on several Las Vegas trips with in the past.”

Although predominantly an online poker player, our package winner is set to delve into the live arena in a bid to sharpen his skills in preparation for what will be the biggest tournament of his life.

“This will the biggest tournament i played. I have some experience playing live cash games here in the Netherlands and also in Las Vegas. I don’t play much live poker at the moment, but in the coming months i will definitely start play some more live poker trying to sharpen those skills.” 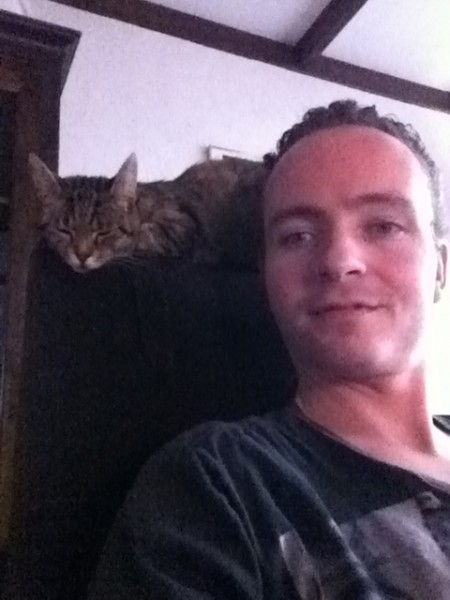 Pieter with his cat, Daisy

While the partypoker MILLIONS Caribbean will be the largest buy-in tournament Breedveld has played, he does have some experience of high stakes tournaments online and his background in sit & go games should stand him in good stead for the $5 million guaranteed tournament he’ll be competing in later this year.

“My biggest tourney was a $1050 online. Most of my play these days are in Sit and go’s/Spin and go’s and also tournaments. I have been playing poker for about 10 years already.
And i’m always trying to improve by reviewing my play, analyzing situations, doing database review etc. I have played so many sit and go’s and tournaments in those years online
that I’m pretty well adapt to a lot situations, like icm, playing different stack depths etc. I just hope i can keep my cool and make the right decisions in the heat of the moment. That’s something you probably can only learn by actually playing a live events such as this. It’s going to be a awesome experience for me anyway!”
Unsurprisingly, Breeveld is a fan of the recent Quick-Fire Sit & Go Leaderboard promotion and the host of other promos partypoker has been and continues to run.

“I’m really big fan of these kind of promotions. And i’m not just saying that because I was so lucky to win a CPP package haha. Especially the fact that you place on the leaderboard in a four-hour period. So you can play any block you want, and then really go for it in those for four hours. I am really looking forward to similar promotions in the future.”

Our lucky winner was also happy with the direction partypoker has taken in recent months as we attempt to make playing a partypoker a fantastic experience for everyone.

“We have seen the direction poker has gone at some other sites and I think the timing of all these changes at party poker couldn’t come at a better time. With the improved rakeback and all sorts of other promotions you make your players feel valued for playing at your site. There is still a lot to improve, but i think party is definitely heading in the right direction!

So what advice does Breeveld have for his fellow partypoker players who are sitting on the fence, pondering whether to get stuck into a promotion or not?

“Just give it a shot. There are different ways to qualify. Sometimes at no cost to the player. Nothing to lose! You get a lot of free satellite tickets at party almost every day to try to win your way into the live events. Or you get lucky like me haha!”

Satellites for the Caribbean Poker Party and the Leaderboard promotion are still available but can’t run forever, so why not try and win yourself a $10,000 package and join this lucky man i Punta Cana this November?

If you already have an account with us, click here to open partypoker and hit the tables.