Charlie Carrel is one of the world’s best poker tournament players and he really shone in the 14th event of the WPT Online Series, the $25,500 buy-in Super High Roller. 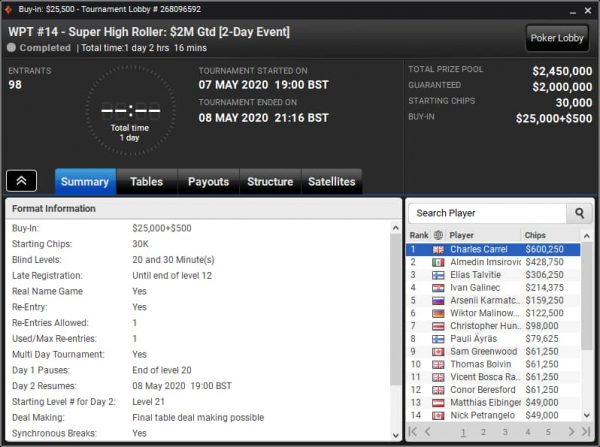 Australian superstar Michael Addamo was the unfortunate soul to burst the money bubble after busting in 17th place. This paved the way for such luminaries as Juan Pardo, Roger Teska, Nick Petrangelo and Matthias Eibinger to see a return on their investments.

Finland’s Pauli Ayras performed heroics in the recent Poker Masters Online but could only muster an eighth-place finish here. Chris Hunichen collected the $98,000 seventh-place prize with Wiktor Malinowski banking $122,500 when his tournament ended in sixth.

Fifth-place and $159,250 went to Arsenii Karmatckii before Ivan Galinec crashed out in fourth and scooped $214,375.

Elias Talvitie was the penultimate player eliminated, the Finn collecting $306,250 for his third-place exit. This left Charlie Carrel and Ali Imsirovic to play heads-up for the title. Nobody would have been surprised to see a deal struck because more than $170,000 was the difference between the two payouts.

No deal happened, however, meaning Carrel got his hands on $600,250 when he won the one-on-one battle. This left Imsirovic as the tournament’s bridesmaid, a result that came with $428,750.

The Mini 6-max Hyper Knockout only took 3.5 hours from start to finish despite having 84 1 entries. This made for a massive hourly rate for Argentina’s Agustin Amestoy who was the last man standing in this event.

The Argentinian defeated Kazakhstan’s Vyachesav Bondartsev heads-up to bank $2,876 from the main prize pool plus an additional $2,538 worth of bounties. Our runner-up turned their $55 buy-in into $2,782 plus $648.

Three other players won more than $1,000 when bounties were considered. Ross Elliott finished fifth for a combined $1,903, Matthew Eardley left us in fourth and reeled in, $2,047 while third-place finisher Aleksey Konoplev helped himself to a total prize worth $2,444. 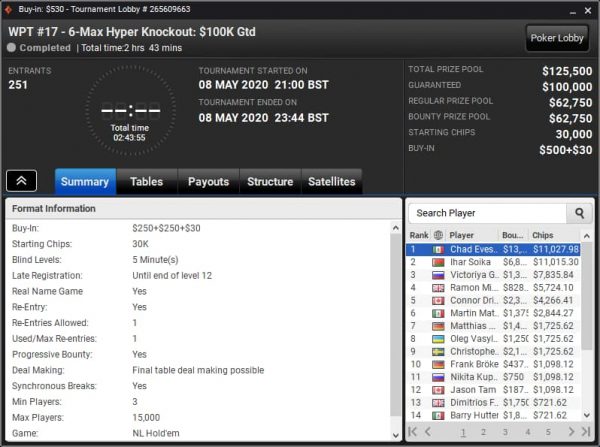 The $530 buy-in 6-max Hyper Knockout saw 251 players take to the partypoker felt and Chad Eveslage outlast them all. The Mexico-based grinder secured an $11,027 payout from the main prize pool which was boosted by $13,101 worth of bounties.

Several household names put together deep runs. Sami Kelopuro, Marc-Andre Ladouceur, and Shawn Buchanan among them. Barry Hutter also cashed, while Marty Mathis and Connor Drinan made it to the final table, falling in sixth and fifth-place respectively.