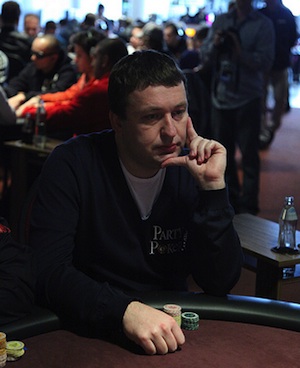 Bike race from Vienna to Bratislava

There’s all these signs here at the Montesino in Vienna as the organizers of the WPT Bratislava are providing transfers to Slovakia.

They say it is about 70 kilometres from Vienna to Bratislava and takes 45 minutes in a car. I suppose it would take five minutes if you were Phil Hellmuth and getting a ride on JAY-Z’s private jet, while talking politics with George W Bush and getting massaged by Hilary Swank.

Anyway, I bumped into James Akenhead the other night, he likes late nights and someone must have spiked his drinks as he decided to ride my bike around the casino.

That’s where a great thought came to mind – I have my Sunday Bike Ride online but let’s have a bike race from Vienna to Bratislava! I will provide the €2,500 + €220 WPT Bratislava buy-in for Day 1B (Thursday) to the winner.

Akenhead is in, he used to be a train driver but I’m not convinced he’ll be as controlled on two wheels – physical exertion is needed. Being a masterful bronzed fitness god I cannot see that he would have a chance against me. I challenged Usain Bolt for god sake!

My agents in the field have also told me that people are interested. Names I hear are Sam Trickett, David Vamplew, Roberto Romanello, Marvin , my love child John Eames, Dominik Nitsche, Marko Neumann, Marvin Reittenmaier and Martins Adeniya. Kids, kids, kids – they won’t have the heart or commitment to do this – if there are prop bets I will take everything they have.