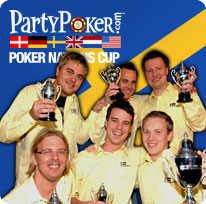 The third annual partypoker203.com Poker Nations Cup is under way in Cardiff, Wales, concluding on the 10th April. The team event features line-ups from Germany, Great Britain, Ireland, Sweden, Holland and the United States. The winning team will scoop $100,000 in this unique tournament that sees players pursuing personal and team glory, along with the honour of representing their home nation.

When Tournament Director Thomas Kremser called for the first card to be dealt, Germany were 3/1 favourites to win.

A PartyBets.com spokesman said: “The German team was amongst the outsiders when the market first went up but the money has just kept coming for Michael Keiner’s side and their odds have been cut in half from 6/1 to 3/1. Defending champions Sweden have been friendless in the market and were 5/1 outsiders at the off, drifting from being the initial 3/1 favourites to win.”

The tournament sees one partypoker203.com VIP qualifier on each team playing alongside five world class poker professionals from the same participating nations, except the USA who feature celebrity player Montel Willams.

Each player pays a buy-in of $5,000 making a total prize pool of $280,000 ($100,000 added by PartyPoker). Over six heats, each player will compete once to score points for their team, and individual match winners scoop $20,000 for themselves for their efforts. All six teams will then compete in a “tag” final where each team captain’s judgment is vital, as it is up to them to make tactical substitutions and strategic “time outs.”

The size of the team chip stacks for the tag final depend on the points gained by the players in the six heats. The triumphant nation will be the last with a player standing.

The captain’s have made their decisions for heat one and Neil Channing will line-up for Great Britain, Johan Storakers for Sweden, Chad Brown for the USA, Padraig Parkinson for Ireland, Thomas Bihl for Germany and Hans Ritburg for Holland.

“We have already won the bronze and silver in the last couple of years. This year we have the Gold and are going for gold.” Robert Williamson III – USA

“I don’t care how we get on as long as we beat Great Britain’s ‘B’ team.” Padraig Parkinson – Ireland

“Public opinion most of the time is right, so the odds suggest we should get what we deserve.” Michael Keiner – Germany

“We’re excited to be here again and defend the title we won last year. We were seen as outsiders in 2007 but look what happened!” Bo Sehlstedt – Sweden

“All the teams are excellent and we are really excited to be here. We have come to win.” Roland De Wolfe – Great Britain

“We all know that everyone is going for gold and just not Jamie Gold. There will be no repeat of the obvious – the Dutch are here to surprise.” Marcel Luske – Holland

Last year Sweden triumphed over the USA in a rollercoaster tag-final, while the year before there was glory for Great Britain. Coverage of the 2008 event will be produced for Channel 4 in the UK by Presentable, presented by Vicky Coren and broadcast in the autumn. The action will then be distributed internationally.