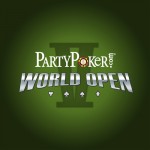 After a marathon eight hour session Luke ‘FullFlush1’ Schwartz was the last man standing in heat 1 of the World Open V.

Luke was lucky to be even playing after his earlier altercation with the casino staff, see the previous post for more details.

Play got underway at midday with players sitting down with $300,000 worth of chips.  The new triple stacked structure proved to be a great success creating a very tactical, tense battle as the players used their deep stacks make creative plays.

Surprisingly, Luke found himself heads up against one of our two online qualifiers in this heat, German Christian Schaefer.  With equal stacks going into the heads-up finale it was anyone’s game to win but with much more experience at this level all of the smart money was behind Luke Schwartz to progress to Thursday’s final.
Play initially went against the form as Schaefer steadily built up a commanding lead leaving the tempestous Schwartz visibly frustrated.  With a lead of over 1.5 million chips it looked as if Schaefer was going to pull off a major upset but Schwartz began to fight back, picking up his play with aggressive pre-flop raises.

The game suddenly changed with one monstrous pot which gave Schwartz an almost insurmountable advantage.  The challengers went all-in after the flop, Schwartz had the top pair and Schaefer a straight draw.  The German failed to improve his hand on the turn and river as Schwartz’s pair of nines took the pot down.  It left Schaefer with barely enough chips to place the small blind and after a couple more hands Schwartz had finally won.

Earlier on in the day it had looked as if Yevgeniy Tomashenko would carry on his remarkable run of recent months as he dominated the first couple of hours but after a couple of bad beats he left the table in fourth place.  That left Schwartz up against our two qualifiers from Germany, Schaefer and Jorg Muller (Jorg had earlier knocked out both Ian Frazer and fellow pro Andy Ward in his first live tournament).

The two amateurs certainly didn’t show any nerves and looked right at home mixing it with the pros.  Unfortunately, we did not get to see the qualifiers battle it out head to head for the final place but Schaefer will go into the round robin heat  for the players finishing in second place.

Heat 2 has got swiftly underway as we go through the night and into tomorrow morning until we have a winner.  But you don’t have to wait for the latest news from the second heat, it all being covered over at our twitter feed.  Sign up and follow partypokernews to stay in the know.