When Adrian Mateos was only 19 years of age, he won the 2013 World Series of Poker Europe Main Event for a cool €1,000,000 and he has now given himself a realistic chance of adding a coveted World Poker Tour (WPT) title to his name after finishing Day 1a of the 2014 partypoker WPT UK Main Event as the chip leader.

Mateos, a Spanish pro, flew under the radar for much of Day 1a, but was catapulted into the limelight and the top of the chip counts after coming out unscathed from a three-way all-in confrontation.

Emran Hussain raised to 1,200 from early position with

and Mateos three-bet to 3,200 from the button with

. The action passed to Sergi Reixach on the button and he four-bet all-in for 14,000 in total, not knowing that his

was soon to become an expensive second-best hand.

Hussain tanked for a couple of minutes before moving all-in and Mateos snap-called with his aces. A few seconds later, the

board was in view, both Hussain and Reixach busted and Mateos found himself in pole position, where he stayed for the rest of the opening starting flight.

Mike Sexton safely through to Day 2 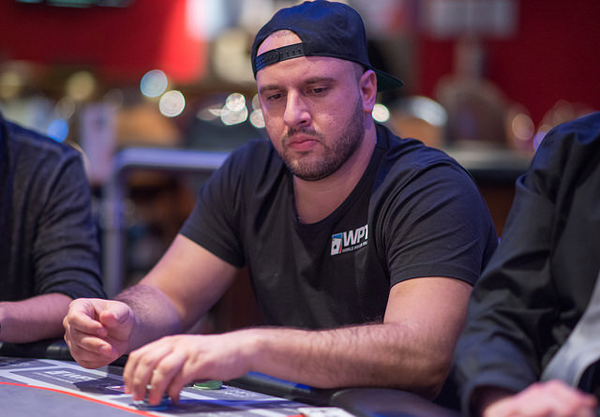 It was a bad day at the DTD felt for such luminaries as Jack Salter, Tom Middleton, Dominik Nitsche, Simon Deadman, Ram “Crazy Horse” Vaswani, Christopher Brammer, Sam Trickett and Michael “The Grinder” Mizrachi who all busted at various points of the day, but will most likely re-enter on Day 1b and fight for their slice of the £1,000,000 guaranteed prize pool.

Day 1b, the final starting day, kicks off at 13:00 GMT and should see a massive crowd descend on the Nottingham-based DTD, especially as late registration is open until 13:00 GMT on November 20. Two hundred and forty players are needed to ensure the £1,000,000 guarantee is met, will that lofty figure be reached? We don’t have long to wait to find out! Some of the best poker talent in the world were busy battling it out for the title of 2014 partypoker WPT UK High Roller while the Main Event rolled on. A total of 50 players exchanged £6,000 for the chance of WPT glory, creating a £300,000 prize pool as they did so.

The likes of Toby Lewis, Craig McCorkell, David Vamplew, Oliver Price and Stephen Chidwick all made it through to the second day’s play, but fell short of the money place – Chidwick finishing in seventh place and was the unfortunate soul to burst the money bubble.

Dhru Patel was the first player to secure some money for his efforts in the High Roller, busting sixth for an £18,000 score. Following Patel to the cashier’s desk were Pablo Fernandez (fifth for £24,000), John Haigh (fourth for £32,000) and Stuart Rutter (third for £43,000), leaving Bryn Kenney and Patrick Leonard to lock horns heads-up for the trophy and the not-so-little matter of the £100,000 first place prize.

It was Kenney who emerged victorious from his battle with Leonard, the world number one for online poker tournaments, scooping yet another six-figure payday and leaving British star Leonard to pick up the still-impressive runner-up prize of £62,000.

Has reading all about the partypoker WPT500 UK recently made you wish it were you who was competing for life-changing money in a World Poker Tour event? If so, you may want to check out the satellite tournaments feeding into the WPT Fallsview in Canada, which are currently in the partypoker lobby where you can win WPT Fallsview package for as little as a $5 outlay, can you imagine how awesome that would be?

We will be at WPT Fallsview, will you?