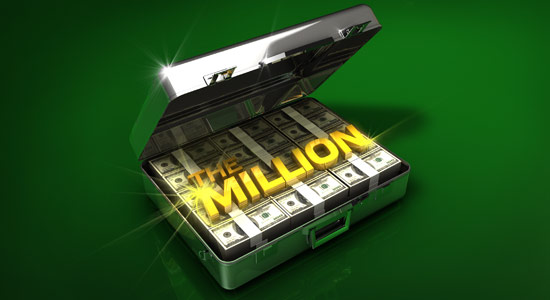 A Ph3n0m3n4l One Million Guaranteed

Week after week there’s the 300K Guaranteed to be found in the tournament lobby. Peanuts compared to what’s going on once every couple of months.

Take Me To The Money

Nothing for the faint-hearted. You should know your way around the poker table when playing for that kind of money. On the other hand, you don’t need that kind of money to get a shot. There’s daily satellites to be found in the tournament lobby.

1,643 players started last Sunday. That meant there was a bit of an overlay in the tournament. All the more reason to participate next month, as you might get some extra value again.

It took a total of ten hours of play to determine the winner. One and a half of those hours were reserved for the final table, that started with these chipcounts:

No huge chipleader, no desperate shortstacks. All requirements for an exciting final table where there. It was f3n0m3n0, who took an early step forward, eliminating SuperMikeyGG with a pair of Queens against

It took a lot of endurance from there on. Players weren’t eager to play big pots, everyone was looking for that stealing spot.
kingkai84 and f3n0m3n0 managed to accumulate a lot of chips, before we saw several big hands in a row.

from middle position. It was Nofear2u in the big blind, that called with

and sealed MyHumpMyHumpMyH‘s fate.
Only two hands later H0d0R joined him at the rail, when his

was no match for f3n0m3n0‘s Pocket Queens.

Take A Break From All The Action

After this heavy action, play slowed down significantly. Once more it was f3n0m3n0, who took care of the next elimination. Having a very aggressive image, he managed to take out Nofear2u, who got his chips in bad on a pure bluff with Jack high and no draw on the flop. f3n0m3n0 himself was holding pocket tens.

Only one hand later he did it again. This time he called shortstack Legenden‘s all in, who showed

, hit an ace on the flop and went on to have a substantial lead over his opponents.

Using his huge stack to apply pressure, f3n0m3n0 went on to accumulate more chips. It was kingkai84, who managed to gain some ground by using his Pocket Eights to eliminate PeNiNaCaN

Play went on for another 15 minutes (with Timeoutplease collecting some nice pots), before the three remaining players agreed to discuss a deal.

Having most chips, f3n0m3n0 was the official winner of this month’s “The Million”, taking home exactly $150,000 in cash!

Qualify For The Next Million