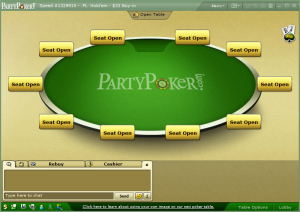 We all have days we just can’t seem to lose. partypoker203.com player Martin, from Denmark, had one of those days recently – and managed to turn it into a $50K payday thanks to our Jackpot STT promotion.

Martin won five single table tournaments back to back to scoop the $50k prize.

“I almost never play full ring STTs” Martin tells us. “I played the first one night when the action was slow in the heads-up STTs that I normally play. Then I played two more some other night while chatting with a friend and just having fun. Then when I had three wins I tried to win two more for the Jackpot of course.”

After winning the fourth STT, Martin began to realise the $50K was in sight. “I called the Palladium hotline number to ask if the Jackpot was still there, then I played the last one.”

“When we where 3 left, I had 15k chips, 2nd was at 5k chips and 3rd had like 50 chips and he kept winning all-ins! So at that point I felt very good about my chances as I could steal the blinds from the middle guy almost every hand as he wanted a higher pay out.”

“While playing the last one my pulse was high. I have been playing for a living for some years now and I’m used to playing for a lot of money, but I never cashed this big in one night as I mostly grind heads-up STTs and not MTTs.”

It’s not the first time Martin has reached the money end of a partypoker203.com promotion. “I came 2nd in partypoker203.com’s WSOP for Life VIP Freeroll 2 months back and got $2,000. The winner of that freeroll got 20 WSOP buy ins worth $200,000, so I’m happy about taking something down finally!”